Why So Many Great 7mm’s?

The other day I was loading some ammunition for a customer and noticed he had ordered four different calibers and they were all in the 7mm family.  A 7-08, 7 Remington Magnum, 7 Weatherby Magnum and 28 Nosler.  I started counting all of the different 7mm’s that are made by ammunition factories and I realized that there were 14 different ones.  This doesn’t even count the Wildcat 7mm’s that are commonly made.

I checked my inventory of reloading dies and counted 24 different dies for 7mm’s.  I looked at a good old American caliber, the .270, and realized there are only three factory calibers in the 270 family.  So why do we have so many 7mm’s?

First, the 7mm caliber is both a European caliber and an American caliber.  In fact, you could call it a World caliber.  The 7mm covers a full gambit of different applications.  The three different .270 calibers (270 Winchester, 270 Weatherby and the 270 Winchester Short Magnum) all do the same thing when compared to the 7mm.  Both calibers shoot about the same velocity and shoot the same bullet weight.  The .270 is considered to be a deer caliber and not much more.

Several 7mm’s are designed for one reason, where other 7mm’s are made to do about anything.  The 7mm’s make a great deer caliber and much more.  If you hunt with one, then you know what I mean.  Let’s take a look at some of the best and some of the most unusual calibers in the 7mm line up.

The smallest of the 7mm is the 7mm TCU.  This caliber was created for the Handgun Silhouette shooter.  The IHMSA shooters needed a caliber that was accurate enough to make consistent hits on steel rams at 200 yards.  The caliber had to have low recoil but needed to produce enough energy to knock over the 20-pound rams at 200 yards.

The 7mm TCU is a 223 Improved case necked up to 7mm.  The TCU was chambered in the Thompson Center Contender single shot Pistol and is my favorite caliber for shooting long range silhouette.  I would say that more than 50 percent of the production shooters used the 7mm TCU.  For target shooting, this was the best caliber made for a single shot handgun.

Now here is the problem.  Shooters tried to hunt with the TCU and it per-formed miserably.  Shooters thought that if it would win the long-range shooting match then it would certainly kill a whitetail deer.

The TCU shot a 7mm bullet at such a slow velocity the bullet would not expand.  Without good expansion or good penetration, the TCU left many wounded deer in the field.  Now build a TC single shot in a 7mm 08 or one of the old XP100 re-barreled or re-chambered to 7-08 and you had a real 200-yard hunting handgun.

How about a 7mm for shooting elephant?  Well, the 7mm Mauser is just that, an elephant killer.  One of the most famous ivory hunters of the past century was Kilimanjaro Bell.  Bell accounted for hunting and shooting more than one thousand elephants.

Bell’s caliber of choice was the 7 x 57 Mauser.  After having problems killing elephant with a 4-bore rifle, Bell figured out where to place the shot on an elephant’s head to kill it instantly.  He changed to the 7 Mauser and using full metal jacketed bullets, Bell would brain the elephant and drop it in his tracks.

Now I am not going to use a 7 Mauser on an elephant, but I have shot deer with them and it performed great.  In both of these cases using a 7mm on elephant or whitetail deer you have to use the right bullet.  I know many hunters that think this is the perfect North American caliber.

The 7 Mauser has low recoil, low noise, and it is short and light.  In the hands of the right shooter it could very well be the perfect North American caliber.

The 7mm Remington Mag. has be-come one of the most popular rifle calibers in the world.  This caliber just does everything right.  The 7mm Rem. Mag. is very accurate and shoots about any bullet weight well.  The recoil is light enough that most any one can handle it.  It makes a good caliber for women or recoil sensitive men.  The 7mm Rem. Mag. shoots flat enough to make long 400-yard shots and has enough energy to make clean kills at the same distance.

As far as all around calibers, the 7mm Rem. Mag. comes close to being the perfect caliber.  I would hunt most any animal in North America with it as well as shooting plains game in Africa.

Now if you want a great flat shooting, long range caliber, it is hard to beat the 28 Nosler or 7mm Remington Ultra Mag.  These are two of the new breed of calibers that are made for high velocity and flat shooting.  The 7mm Ultra Mag. will shoot a 150-grain bullet over 3,400 feet per second.  At 500 yards, this caliber still has over 2,000-foot pounds of energy and only drops 24 inches.

In the hands of a well-practiced shooter, the 7mm Ultra Mag. can shoot groups well under six inches at 500 yards.  I know of several high-power shooters using the new 28 Nosler that shoot less than four-inch groups at 1,000 yards with this caliber. 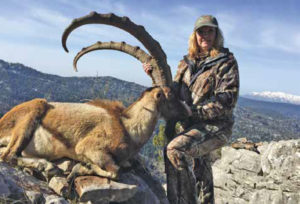 The author’s wife Carol with a very nice Ibex she shot with a 7STW.

I have shot several Texas exotics with this caliber and my wife hunts with a 7mm STW which is very similar caliber.  We both are very impressed with how well it works. The only problems are heavy recoil, long barrels and severe noise.  This is one of the loudest caliber’s I have ever shot.  If you add a muzzle break it will stop the recoil, but it adds two inches to an already long barrel.  The noise is deafening without a break, but if you don’t have one, it can make you bleed.

Some of the better 7mm rifle calibers are no longer being made.  The 7mm Short Ultra Mag is long gone.  The 7 WSM is on its way out and the 7 STW is a goner, which is too bad.  They were all very flat shooting, accurate calibers.

I have just hit on the high lights of the 7mm family of cartridges.  It is easy to see that this caliber can do about anything you would want from a rifle or handgun.  If you are in the market for a new rifle for next year’s hunting season, you might want to do some serious research and take a closer look at the 7mm’s.