If you’re in business there is a saying “the customer is always right”.  Well, sometimes the customer is uninformed, been told something wrong, watched too much TV or is just wrong.  I had two customers order custom rifles from me.  They both wanted lightweight hunting rifles in 7mm Remington Mag.  They wanted the rifles to be easy to carry, accurate, and reliable.  Now, these things are all fine and easy for me to do, but then came a few not so easy things that they wanted.  First, they were going to use the rifles on an Elk hunt.  Now the 7mm Mag is not the best choice for Elk hunting but it will still work fine.  Second, they wanted the rifles to shoot 180 grain Berger bullets.  Still not a problem I can order a faster rate of twist for the rifling in the barrel. A 1 in 8 twist instead of our usual 1 in 9 twist will work fine.  Now for the real problem, they want to be able to shoot and kill their Elk at 1000 yards.  They told me that they want to become long-range hunters and won’t shoot less than 800 yards on any big game animal.  Now I have some ethical problems with this type of hunting and don’t agree with shooting game animals at a very long range. If you are going to try long-range shooting here are some things that will help you be able to make the longer shots.

First, pick the right caliber; the 7mm Remington Mag is a great caliber.  It is accurate, light on recoil, and kills game very well within its limitations.  A 7mm Mag shoots a 150-grain bullet about 3000 feet per second which gives it 2600 foot-pounds of energy at the muzzle.  At 500 yards the velocity is down to 1975 feet per second and the energy is at 1300 foot-pounds.  At 1000 yards the velocity is 1235 feet per second and the energy is 500 foot-pounds.  Not what I would consider enough energy to cleanly kill a White Tail deer let alone an Elk.  Now, what happens when you use a longer heavier bullet like the 180 grain Berger?  First, the best velocity I can get with this bullet in a magnum caliber is 2650 feet per second.  So the downrange energy is only 1350 foot-pounds at 500 yards and velocity at 1000 yards is 1150 fps with the energy being 575 foot-pounds.  I’m not sure that anyone would want to shoot a rabbit at that range with this type of energy let alone an Elk.  But this bullet has a high ballistic coefficient, so it will shoot flatter.  Let’s compare the two different loads.  The 150-grain load drops 40 inches at 500 yards and the 180 grain drops 36 at the same distance.  At 1000 yards the 150-grain bullet drops 310 inches and the 180 grain drops 280 inches.  Well, what do you think?  Is it worth it to shoot a 7mm Rem Mag loaded with a Berger bullet for long-range hunting?  The other big problem with long-range hunting is will the bullet expand enough and will it penetrate enough to get into the vitals and cleanly kill the game animal you are hunting?  I called both Hornady and Barnes and asked them what is the minimum velocity needed to make their bullets expand.  Both companies said 1500 feet per second is perfect but some bullets will still expand 10 to 15 % as slow as 1300 feet per second.  I ran the numbers on several different hunting calibers to see at what range the bullet drops below 1300 feet per second.  The one caliber that surprised me was the 6.5 Creedmoor, using a 143 grain Hornady ELDX bullet, it doesn’t drop below 1300 feet per second until 1250 yards but it does drop over 600 inches at that range.

So what is a good caliber for long-range hunting?  What you are going to hunt is the question you need to ask yourself.  If you will only hunt Deer, Caribou, and Pronghorn, then I would pick one of the big 30 caliber rifles.  A 300 Ultra or the 30-378 Weatherby, both make good long-range rifles.  The 30 caliber guns shoot 180 grain or 200-grain bullets better than any 7 Mag will. The new 28 Nosler using one of the new high ballistic coefficient bullets would be the best bet in the 7 mm category.  The velocity of either of these big 30’s are 3300 feet per second or better so they have more energy and less drop at 500 or 1000 yards.  Now if you are really going to try and shoot an 800-pound game animal like an Elk, I think you need a bigger caliber.  The 338 Ultra, 338-378 Weatherby, or the 338 Lapua, all make great long-range hunting rifles.  Any of these calibers will shoot the heavy 225 or 250-grain bullet over 3000 feet per second and will have adequate foot-pounds of energy and be able to penetrate deep enough to kill big game at long range.  The 338 caliber guns may not shoot as flat as the big 30’s but the difference is small.

Let’s take a look at bullets.  Many of the bullets with the higher ballistic coefficients are not made for hunting.  Many of these types of bullets are made for target shooting and will not expand reliably.  Also, bullets need a certain velocity to perform right.  If the velocity is too high then the bullet can expand too much and come apart.  If the velocity is too low then the bullet will not expand at all, and just go right through the animal without any shock.  So how fast does a bullet need to be going to work right?  Looking at different web sites, some show that a bullet needs about 1500 feet per second to expand reliably.  As little as 1300 feet per second will expand a soft nose bullet but a bullet like a Barnes TripleShock or a Berger VLD hunting bullet will need more velocity to accomplish adequate expansion. The Nosler Partition or Swift A-Frame bullets will expand at lower velocity and penetrate better than most solid copper bullets will. Also, many of the match hollow-point bullets won’t expand no matter how fast or slow you make them go.  Match bullets are made for target shooting not for hunting. 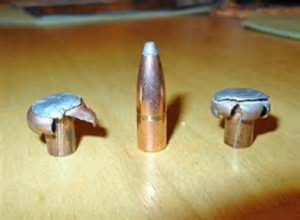 One of the Best bullets for Bear is the Nosler Partition bullet!

Not everyone is going to be able to handle the recoil of the bigger caliber rifles.  Muzzle breaks help a great deal and make the 338’s kick less than the 7 Mags. The bigger caliber rifles will be a little heavier than the 7 Mags will be.  The barrels will also be longer so all the powder can be burned up inside the barrel. If you hate the noise the breaks make and don’t want to carry a half-pound heavier rifle then don’t plan on shooting 1000 yards at game.

If you really want to shoot Big game at long range carry a big enough gun to cleanly kill the animal being hunted.  Use the right type of bullet, one that will shoot accurately and will expand at the lower velocity 1000 yard shots will have. Buy a good scope, one that has range-finding lines or ballistic turrets.  Also, make sure the scope has a parallax adjustment on it.  Last and probably the most important is to practice; go shooting at a longer range where ever you can.  If you can’t shoot 2-inch groups at 200 yards then you can’t hit an animal at 1000 yards.  Start out shooting prairie dogs at long range.  If you get to where you can hit them at 600 or 800 yards then you might consider hunting game animals at long range.  Try shooting prairie dogs with your large caliber hunting rifle; it will give you great practice for long-range hunting.  After all, you won’t be using a 22-250 varmint rifle for shooting Mule Deer at 800 yards.