The Most Rewarding Thing about Shooting

Last weekend I spent all day Saturday shooting with some new shooters. Most of the time new shooters are kids but this time I was teaching adults to shoot. Two of the shooters were a father and his 17-year-old son. They were from South Africa and had never shot a semi-auto rifle. The son had never shot any type of firearm in his life. I taught both of them how to shoot with AR-15 rifles. I loved watching the smiles on their faces when they hit the bullseye for the first time. The second group I taught was a family who has moved to Texas from Chicago. Chicago is one of the worst cities to live in if you want to own or even shoot a gun. The husband had shot a 45 handgun once before. His wife and 19-year-old son had never shot before. I brought 6 different handguns in three different calibers and they had a great time. The big smile happens every time when new shooters hit the bullseye. Even older shooters act like kids and want to keep their targets to show to their friends. I get more enjoyment out of shooting and teaching others than I do shooting or hunting myself.

Now that hunting season is coming to a close, from all the reports I’ve had from my customers, it looks like it was a banner year! I have heard of more big deer being shot this year than ever before. I even managed to get out and do some hunting myself – the freezer was looking a little bare. I didn’t shoot anything big and I don’t really go deer hunting for that reason anymore. I go for the most important reason, for friendship and family. I enjoy hearing about my friend’s hunts and spending time with my family around the campfire at the deer camp. I taught both my wife and children how to shoot and hunt. For them, it has become a great lifestyle and a normal thing to do. But for most hunters in the world, it is a man’s sport. Teaching your kids to hunt and shoot can be the most rewarding thing you can ever have happen in your life. The first time your child hits the bulls-eye of a target is better than that long shot you made on a buck last year. The first doe your daughter shoots can be as special as your first hunt, but a thousand times better for both of you! 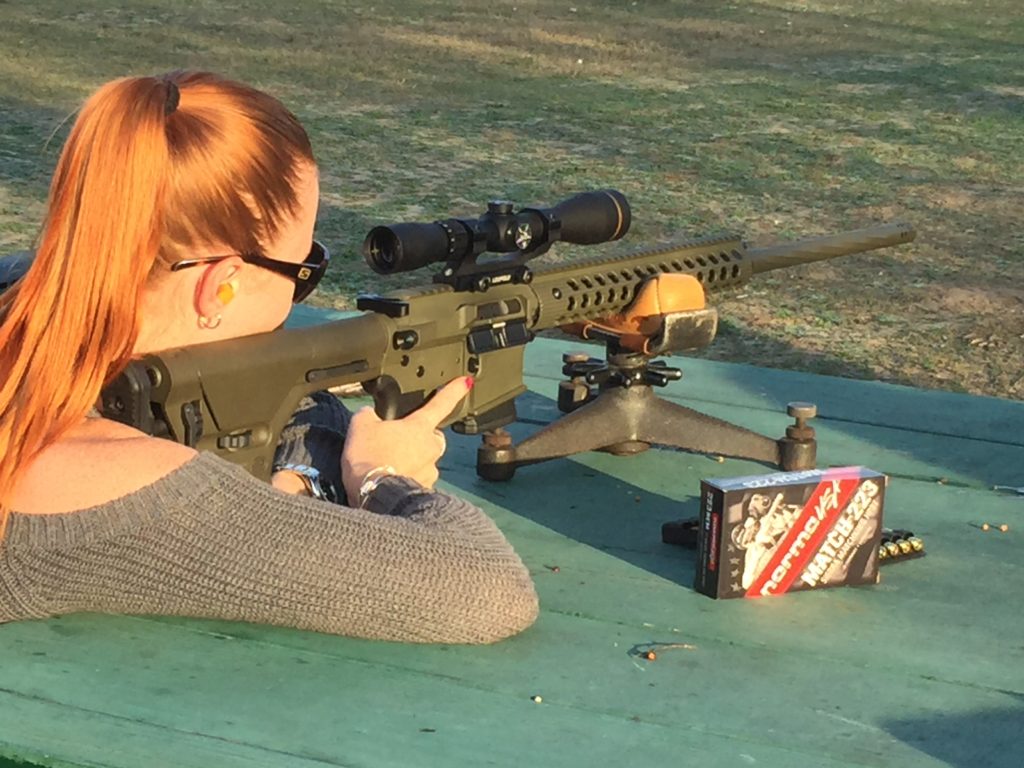 Teaching your kids to hunt and shoot can also be just as frustrating as it is rewarding. Kids have a short attention span, so keep things fun and exciting. When you go to the range to shoot, remember they are not the same size as you are. Don’t expect your 30-06 deer rifle to work for your 7-year-old daughter. A rifle has to fit a young shooter or it will hurt them when they shoot and what’s worse is they will remember it hurting each time they pull the trigger from then on. If the rifle is too long, it makes it hard to see through the scope, as well as, being able to reach the trigger. Don’t pick a caliber too big for the child to shoot. A .270 Win. might be right for you but a 22-250 or .243 Win. will work better for the kids. Make sure the rifle fits, the trigger is easy to pull and the rifle doesn’t kick too much. Take time to work with your kids and spend lots of time at the range practicing. Shooting won’t come easy to most young shooters. The schools and TV have taught children that shooting and guns are bad. You have to teach them how much fun the safe handling of guns and shooting can be. If they are going to go hunting, they have to practice first!

Many factory guns are made to fit smaller shooters. Remington is building their Model 700 in a youth model. The stock is cut down 1 inch shorter and the barrel is from 2 to 4 inches shorter than a normal rifle. This is a great gun for beginners. I have worked on several of these rifles and shot many of them. They work great and the accuracy is everything you need for hunting. I like this rifle in a .243 Winchester caliber for kids to shoot. I recommend having the trigger lightened to about 3 or 4 pounds, so a little finger can pull it easily. Also, shoot a lighter bullet. I like the 80 to 90-grain bullets in a .243 for deer hunting. The recoil will be less, the accuracy will be better and I have never seen a White-Tail walk away from a well placed 85 grain .243 bullet. Scopes can be a big problem for kids. Young eyes can see things we can’t see anymore, but you have to train their eyes to look for the cross-hairs. Don’t overpower the scope for young shooters. A good 4 power scope will work better than a 12 power. A good 3X9 is great for kids but keep the power set low for them. At 9 power it is hard to keep the cross-hairs from moving all around on the target or the animal. Use a heavy duplex cross-hair because it’s easy to see them in the scope, even better, get a scope with an illuminated reticle for the young shooter. Millet is making a great scope with an illuminated reticle in 1 to 4 power. I really like this scope and have several on some of my personal rifles. The scope is clear, small in size and best of all, the price is great. For less than $300, I can have an illuminated reticle scope with good cross-hairs that work.

Now, all of this can get expensive really quick. A new rifle, scope, trigger work, ammo, and shooting time at the range or even lessons tend to add up before hunting season even gets here. There are several ways to get your kids shooting on a budget. First, the rifle doesn’t have to be a deluxe grade with all the bells and whistles. I started hunting deer with a single shot 30-30 with a cut down stock and a slip-on recoil pad. Several companies make single shot rifles that are already cut down for kids. There are lots of inexpensive scopes on the market like the Millet I talked about earlier. Both Tasco and Burris make great budget line scopes in the 3X9 power range. Buy good mounts for the rifle and scope. Nothing messes up a hunt worse than having a scope come loose and not being able to hit anything. Ammo prices can range from cheap to very expensive. Both Federal and Hornady make great practice ammo that is as deadly as it comes. I have shot many deer with both of these brands of ammo and they work very well. Last, having a trigger job done is not cheap, but in the long run, it will pay off with better and easier shooting and good solid hits on the game.

Now if a new rifle is not in your budget for the year, consider taking one of your Varmint rifles and cutting it down for your kid to shoot. I like the 22-250 for shooting Hill Country White-Tail deer; they never walk away from a varmint bullet. You can also take out your AR-15 rifle and have your youngster shoot and hunt with it. Most AR’s have a short or collapsible stock and use low power scopes. You will have to get a 5-round magazine and maybe have the trigger lightened, but that’s about it. The .223 is a very deadly caliber if you use the right ammunition and bullet. Don’t go deer hunting with a 55-grain full metal jacket bullet. When I hunt with a .223, I use a soft nose or hollow point bullet. My favorite bullets are the Nosler 50-grain Ballistic Tip and the 52-grain Sierra Match Hollow Point. I have never seen a deer hit any harder with a .270 than I have with a .223 and a 50-grain Nosler Ballistic Tip bullet. A few years back, my daughter and I were hunting on the Barnhart Ranch in South Texas. Katie was having problems with her rifle working; it had fallen off the 4 wheeler and messed up the scope. Irvin handed her his little .223 rifle loaded with 52-grain Sierra bullets and she shot a nice Axis Buck and later an Elk cow. Both dropped with one shot like they had been hit with a Mack truck. So don’t think that you can not use a small caliber for hunting deer, just practice putting the shot in the right place.

These are just a few ways to get your children or wife shooting and hunting. I bet if you think about it, you can figure out a way to get it done for the next hunting season. or me, it is the most rewarding hunting experience that I have ever done and I bet it will be the same for you too!